Having a fire pit in the patio or garden is an amazing way to enjoy family gatherings. The ambiance and warmth people get by sitting around a fire is a timeless pleasure.

Recently, setting up a fire pit became easier than ever. There are ready-to-install fire pits, portable pits for camping, and even compact models that can be placed on a table. And they all work with lighting a match or flipping a switch.

The usage of propane in a gas fire pit depends on many factors such as, the size of the fire pit, the flame height, the climate where you are using it, the type of burner used, and the length of time that you use it. 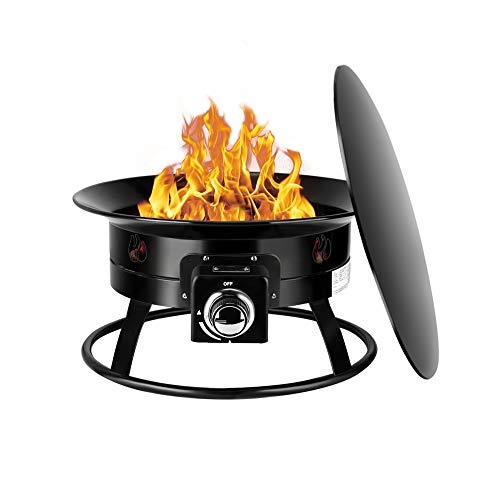 There’s a hitch though. Many people suddenly find that the fuel is all used up, and the pit goes off in the middle of a party. To avoid that, it’s important to know how much propane does a gas fire pit use. And that’s exactly what we’ll answer in the next sections.

What Are the Factors that Affect Propane Consumption

To answer the question of how much propane gas is used in a fire pit, we should first take a look at the various factors that affect its consumption.

The Size of the Fire Pit

A larger pan requires a lot more fuel to heat up the whole surface area than a smaller pan. Thus, a bigger fire pit will always gobble up more propane than a smaller one.

It’s recommended to set up a fire pit that matches the family or group size, without exceeding that estimate.

How Much Time the Fire is On

Fuel consumption is directly dependent on how long the fire pit is left on. This is pretty much the same as the gas cooker or the BBQ grill. It’s wise then to monitor the time and avoid sudden outages. 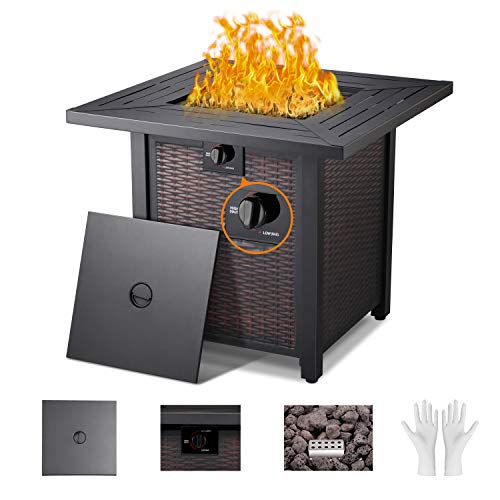 Most fire pits come with a flame height setting. This lets users decide whether a roaring flame is needed or just a hint of an ember.

The lower flame setting can increase the run-time of the fire pit significantly. However, a fire pit is there to provide warmth to a gathering. And setting it too low solely for the sake of economy might not be the right way to go.

The Type of Burner

This is a technical point that many users might not be aware of. The standard stainless steel burners are known to consume more fuel than their custom-made brass counterparts. It’s not too surprising that the high-end burners are more economical in the long run!

The size and shape of the burners matter too. The British Thermal Unit (BTU) is often used to assess heating capabilities, so we’ll see numerically how these factors play out.

The Climate Surrounding the Pit

Lowering the flame height setting is a great way to decrease the consumption of propane in a fire pit. But if you try to do that on a windy day, the flame might go off occasionally.

Additionally, if the weather is too cold, who can resist ramping up the flames to a toasty setting? Usually, this comes with higher consumption of fuel, and the tank would probably become empty after a couple of hours.

The Efficiency of the Air/Propane Mixer

Proper and clean burning of fuels required providing an accurate ratio of fuel-to-air. Typically, there’s a mechanical part that handles that sensitive operation, and it usually comes pre-calibrated for optimal mixing.

After a while, the material and adjustment of the mixer might deteriorate, and hence the efficiency of fuel-burning decreases. Thus, a propane tank that previously provided 8 hours of operation, might drop down to 5. Regular maintenance usually takes care of that. 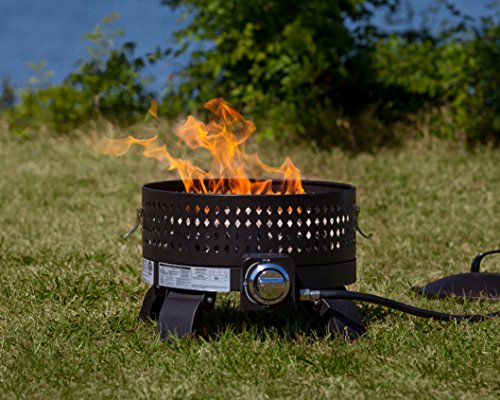 How Much Propane Does a Gas Fire Pit Use

There’s a huge variety of fire pits in the market, and they all have different BTUs, burner types, and sizes. It would be wise to know upfront the amount of propane each model consumes per hour, and make a purchasing decision based on that data.

Additionally, if you already have a fire pit at home, being aware of how much propane is required to keep the pit going is essential. No one wants to face the situation of turning the fire pit on, only to find that the fuel tank is empty.

Assuming that a fire pit has a rating of 86,000 BTU, then it could keep burning for 5 hours. That is to say, it burns 4 pounds of propane/hour. The run time could be extended by using a different type of burner or simply by lowering the flame height setting.

What Is the Optimal Propane Tank Capacity for Fire Pits

Residential usage of propane, like in BBQs and fire pits, is often covered by a 20-pound tank. Many people routinely bring in backups, and that’s a great idea since it’s not easy to find propane tanks in some locations.

The larger 33-pound tanks are considered too high for domestic applications. We usually see them fueling folk lifts, generators, and similar machines.

There are smaller propane tank capacities of 11 and 15 pounds, but these would keep a fire pit flaming for about an hour or two. This is clearly too much of a limitation, and that’s why we often see these sizes in RV heaters, camping gear, and similar compact appliances.

The takeaway then is that the 20-pound propane tanks are well-suited for fire pits, with a single tank providing around 3-6 hours of heating. 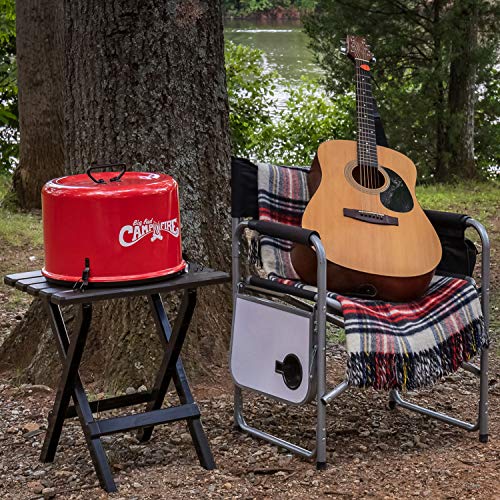 How to Maximize the Utilization of Propane

From the outside, it might seem that there isn’t much that can be done to maximize propane utilization. After all, the fire pit isn’t a complicated system with a multitude of components that can be adjusted.

There are a few things though that can extend the heating time you can get from a propane tank.

Knowing the approximate consumption of fuel is essential in cars, generators, and any other device that runs on gas. Otherwise, one can run out of fuel while not prepared. That’s never a good situation.

Calculating the average run-time of a fire pit per 20-pound propane tank is a good way to stay prepared. As demonstrated, the values differ significantly depending on many factors. But a good estimate can still be found.