We all know that a wood burning fireplace requires a chimney with a proper ventilation system in order to gain oxygen supply for continuous burning and release smoke and combustion gases out of the house safely. 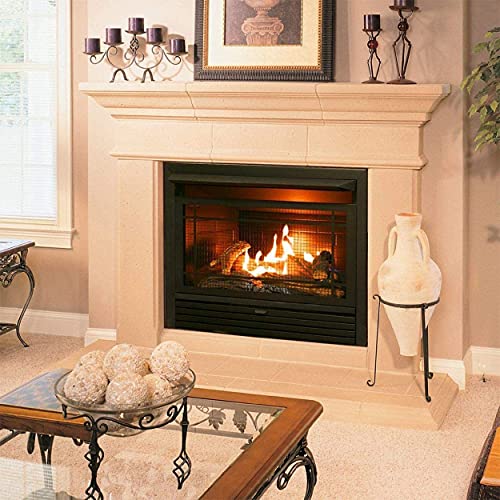 In today’s article, we’ll take a deeper dive into gas fireplaces, and especially the ones that don’t use chimneys, so you can figure out whether they’re the ideal ones for your needs.

Is Chimneys Mandatory for All Kinds of Gas Fireplaces

The quick answer to this question is simply “no”. Unlike wood burning fireplaces that require a special flue and chimney with an extensive venting system to exhaust all the released smoke and combustion fumes, not all gas fireplaces will require a chimney.

This is because there are different types of gas fireplaces out there, with varying degrees of byproduct production.

Therefore, they require different grades of venting systems that rely on pipes and roof vents instead of brick and mortar chimneys.

Moreover, there are some gas fireplaces that may not require any venting at all, but more about them in the following section.

When it comes to venting systems and needing a chimney, there are three different types of gas fireplaces that you can find out there. Let’s have a quick look at each one of them:

Let’s start with direct venting simply because it has been the standard form of venting for traditional fireplaces. Direct venting is simply a fireplace that requires a fully functioning chimney in order to operate.

This type of venting is mandatory for almost all wood burning fireplaces but can be also found in some gas fireplaces. This is because these fireplaces produce large amounts of fumes that can be a serious health risk if they’re not fully exhausted outside the house.

The design of a direct vent transfers all of the byproducts, smoke, and pollutants out of the house through the chimney.

When operating correctly, they’re the safest kind of fireplace vents but they’re also the most expensive to build and maintain.

They’re also known as “B-Vents”. The Natural venting systems also rely on the idea of exhausting hazardous fumes and byproducts to the outside.

However, instead of only relying on direct brick and mortar chimneys to expel these fumes out, you can install a system of pipes and vents to do the job.

In that case, the fireplace is connected to a vent that draws all the byproducts and fumes and leads them into a system of pipes and out of the house using another roof vent.

As the name suggests, ventless fireplaces, also known as “vent-free” fireplaces, don’t use chimneys, pipes, or any form of venting at all. So what’s the catch? And how do they get rid of the burning byproducts and fumes?

The idea behind a ventless gas fireplace relies on using special types of fuels, such as liquid propane, which is known for its clean-burning properties.

In other words, it doesn’t produce dangerous levels of fumes or hazardous pollutants that need to be vented out of the house.

The best thing about these vent-free gas fireplaces is that you’re not restricted to any spot while installing them, so you can have them anywhere in your house, provided that you have a gas or propane line in that area.

It costs a lot less to have them installed because they don’t require any chimneys or modifications. Yet, it still needs a fireplace technician or a professional contractor to install one in your house.

The safety of ventless gas fireplaces has always been a controversial matter because it has two schools of thought.

On one hand, most states allow ventless fireplaces under the regulation of the Association of Certified Home Inspectors (California is the only state where vent-free fireplaces are completely banned).

Many fireplace manufacturers also claim that a ventless fireplace is much safer than a wood-burning one that can easily become a hazard if the chimney is blocked.

On the other hand, there are plenty of concerns about low oxygen levels in rooms as well as increased carbon dioxide and carbon monoxide levels.

Yet, most ventless fireplaces are equipped with special sensors that are designed to shut themselves off automatically if the oxygen levels in a room fall below the safety limits.

Vented vs. Ventless Gas Fireplaces: Which One Should You Buy

There are plenty of factors that will have an impact on your decision. For example, if you’re trying to install a wood burning fireplace in your house, you have no option but to install a fully functional chimney and venting system for your safety.

However, if you have a proper ventilation system that is capable of circulating the air in your house, you can try ventless gas fireplaces.

They burn clean, cheaper, and are much easier to maintain. However, you need to study your options and make sure that the one you go for meets all the necessary safety standards.

Gas fireplaces are extremely convenient and much cleaner than wood burning ones, and as you can see, they can exist in many forms in which they don’t require any vents or chimneys, making them a great option for many people.

Although they require a lot less maintenance, most manufacturers still recommend an annular check-up routine to make sure that the gas fireplace operates optimally, whether they’re vented or ventless.

You also need to weigh in all the pros and cons of each option before you make up your mind about the ideal one for your situation.