Have you ever been lying in your bed, only to look up and see your ceiling fan wobbling out of control? Kind of makes you wonder if at some point in the middle of the night, it’s going to wobble itself out of the ceiling and fall on your head right? So can ceiling fans actually fall out of the ceiling?

While not likely, ceiling fans can and sometimes do fall out of the ceiling! In most cases, this can be attributed to poor installation, a ceiling fan that’s old, rotten wood, or just a complete coincidence. 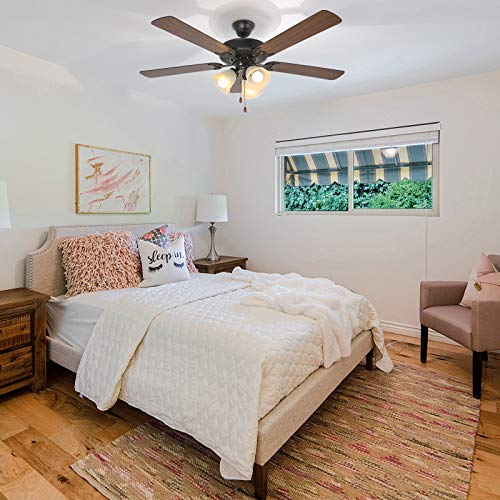 The most common risks for falling fans are aging and improper installation. Some people leave their fans for decades without maintenance, so falling isn’t an unusual occurrence in these cases.

What Are the Possibilities of a Ceiling Fan Falling on Someone

Well, the possibilities are so negligible that there aren’t actual stats you can check. For one, the chance of a ceiling fan falling is pretty low, and the likelihood of someone standing below it when it does, is even less. On top of that, even if a fan fell on someone, it may not cause deadly injuries.

The average ceiling fan weighs around 15–35 pounds on average. If it’s placed around eight feet high from the floor, it’ll generate around 60–150 newton force when it falls. The force is simply not enough to kill an adult.

You may not know this, but the human’s skull resists hits with brute force. It takes a whole lot of pressure to cause even minor damage to the skull. Don’t let Game of Thrones get into your head!

All in all, the chances of someone getting hurt by a ceiling fan are low. 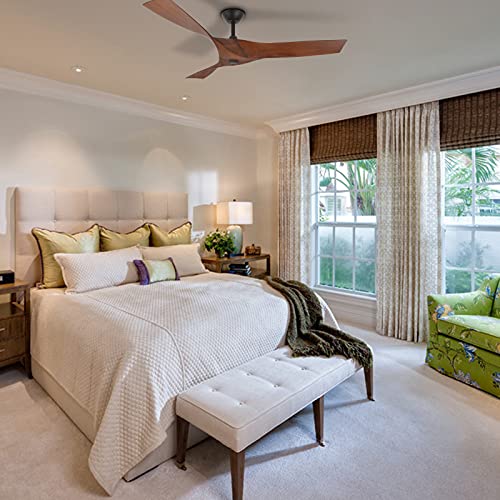 4 Reasons Your Ceiling Fan May Fall out of Its Place

If you know the common reasons for ceiling fans falling, you can prevent that from happening easily. All you need is to be aware of the causes and do regular maintenance to keep the fan like it’s new.

Improper installation is the most common reason for ceiling fans falling or not working. If the person who installed the fan wasn’t paying enough attention, there’s a high chance he installed it in the wrong position or without enough support.

Sometimes, although rare, the ceiling fan will arrive with factory defects. In that case, they won’t be safe for home use, and they may be prone to falling if they’re not fixed.

Other defects may cause different problems. For example, some fans have their blades flying off when they’re turned on. Generally, factory defects are rare, but you should have a professional install and test the fan before you use it to make sure it’s safe.

As with everything, when ceiling fans age, they start to get loose, and the risk of them falling becomes higher. If you’ve had your ceiling fan for ten years or so, it’s likely that it needs major maintenance and tightening the downrod.

If you ditch the maintenance and leave the fan on its own accord, you may find it becoming too loose that it’s risky.

If you’re about to install a ceiling fan, you should have a professional adjust its placement so it’s safe inside the room. Generally, ceiling fans should be ten feet high from the ground and two feet away from the surrounding walls. 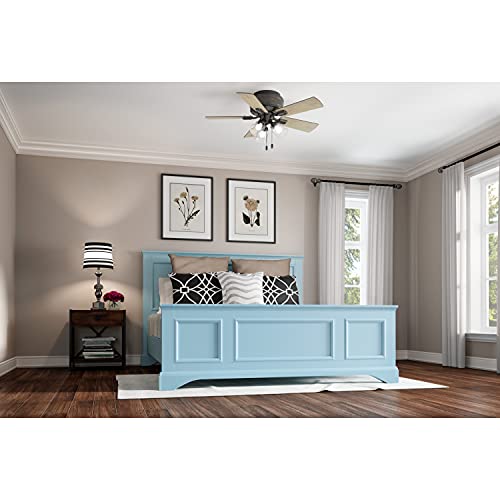 How Do You Know Your Ceiling Fan Needs Replacement

Is it time to throw out your ceiling fan and get a new one? You should know all the signs of an aging fan, so you know the risks associated with continuing to use it. Here’s how to know your ceiling fan is getting old and coming close to the end of its service.

The Fan Is Wobbling

Your ceiling fan shouldn’t wobble at all. If it wobbles, that means its rod is getting loose, putting the whole fan at risk of falling. Even if the fan isn’t wobbling but merely shaking or trembling, it means you need to have someone look at it and tighten it again.

If the reason for the wobbling is a technical issue or a faulty motor, you may need to replace the fan altogether.

The Fan Is Moving Slower Than Usual

If you notice that the fan isn’t making the effect that it should, take a look at the speed at which its blades are rotating. If the speed is slower than average, the connectors are most likely loose, which means the downrod isn’t as secure as it should be.

If you check the downrod and see that it’s tight, the slow-motion may be because of another technical defect. In this case, it’d be wise to call a professional if you can’t deal with electrical devices on your own.

The Fan Is Making an Unusual Noise

With most electrical devices, unusual noises are almost never good news. Any noise means that there’s something wrong with the motor, which leads to replacing the whole thing more often than not.

Generally, the motor should be the first thing to check when you see the fan making a weird noise. Next, you should check if the fan is balanced. It may be making the noise because its components are hitting against each other when they shouldn’t.

Generally, the chances of a ceiling fan falling are pretty slim, but it’d still be wise to watch the fan and make sure its rod is tight and solid. If you do your regular maintenance and watch out for any unusual noises coming out of the fan, it’ll hopefully stay where it should.