Tired of squirrels breaking your birdfeeder open, raiding your garden, and munching on your tree bark? These problems can be irritating and might even lead to you might asking yourself “Are you allowed to shoot squirrels in your backyard?” This is actually a more complicated question than it first seems.

If you live within the city limits of many cities and towns, there are likely restrictions on discharging firearms. So while killing the squirrels might be legal where you are, shooting them may not be. There are several other ways to get rid of the squirrels that are causing you problems.

The first thing to take into consideration is the wildlife laws and if it is even legal to kill squirrels at all where you live. This varies because there are some species that are protected. Though the common varieties of red and grey squirrels often are not out of bounds, there are often restrictions on when and how you can kill them.

After you’ve determined the wildlife rules, then you need to take a look at the gun regulations for your area. Each state or province has its own laws governing the ownership and use of firearms. Many cities and towns also have local ordinances dealing with guns. You will need to make sure to check all the relevant rules for where you are.

Is it Legal to Shoot Squirrels in Your Backyard

The answer to the question “Are you allowed to shoot squirrels in your backyard?” is not a simple yes or no. There are several things you’ll need to check out if you want to stay within the bounds of the law.

First, check with the Department of Agriculture or the DNR in your area to find out what the rules are. Since they are protected as game animals in most states, there is probably a season when you are allowed to shoot or trap squirrels, though some more invasive or overpopulated species are in season all year round. You will probably also need a permit or hunting license.

The types of squirrels you’re allowed to kill may also be restricted, depending on which ones live in your area. Some areas have unique species that are protected and that protection means that other more invasive species are difficult to get rid of without harming the protected squirrels. A few places like Washington DC protect all squirrels.

It’s also possible that you’ll be limited in the way you can kill them. For example, many places that allow hunting require that you use a shotgun, which are often forbidden in towns, and don’t allow pellet guns, which may be allowed in towns. This makes backyard hunting quite a challenge.

Can You Use a Gun To Shoot Squirrels 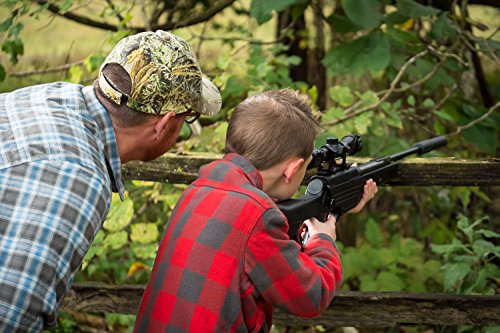 After you’ve figured out the regulations about squirrels in your area, you also need to take a look at the gun laws. It is important to get the proper licenses and permits needed to keep and use firearms. There are serious consequences for not having the right permission, or for using firearms where you are not supposed to.

After you’re set with a proper firearm license, you need to make sure you choose an appropriate gun. Something with a shorter range is better so you don’t hit something you don’t want to. It’s also really important to be familiar with the gun you’re using in order to be able to control your shot. Practice in a safe and legal area before you try hunting squirrels.

Even after complying with licensing and ownership rules, you still may not be able to shoot squirrels in your backyard. Most towns have laws about discharging guns within the city limits, and some cities and states have rules about how close you can be to public roads and footpaths even outside the city limits.

If a firearm is not an option, then you might want to think about an air rifle, sometimes referred to as a pellet gun or BB gun.

There are plenty of air rifles on the market today that have more than enough power to kill squirrels and other small pests.

The only downside to using an air rifle over a .22 caliber rifle is their shooting distance. You will have to get quite a bit closer for the air rifle to be effective. 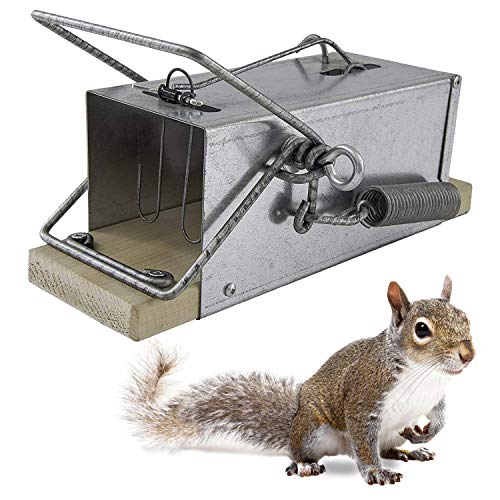 There are several alternatives to target practice when it comes to killing squirrels, though like shooting they are often regulated by state and local wildlife services. Shooting them with a bow and arrow rather than a gun is one way that’s legal in most states, though not the District of Columbia.

This method may be more popular with your neighbors, since it’s quieter and less disruptive. Learning to be accurate with a bow and arrow is more challenging than a gun, though, so may not be best if you’re looking for a quick solution.

There are various traps that are designed for squirrels. Specially designed snap traps that will snap their necks when used correctly, and these are legal in most of the US and Canada except in the locations where there are specific squirrel protections (like DC). There are also live traps designed for relocating squirrels, though relocation is not allowed in a few places. Trapping is also regulated in some states, and you may even need a permit, just like for hunting them.

Poison is often mentioned as an option, but it is not allowed in most places. Because the type and amount of poison you would need would also contaminate the environment, not to mention attracting and killing other animals including pets, poisoning squirrels is illegal in the US. It’s also not a good idea to kill home-invading squirrels with rat poison, since they’re likely to die in inaccessible places and really stink up the place.

Getting Rid of Squirrels Without Killing Them

The live traps mentioned above are an obvious option for a kill-free solution. This option might be challenging depending on how big the squirrel population you are wanting relocated is. A lot of squirrels means there will be a lot of trapping and relocating to be done. If you do go this route, always remember to wear heavy gloves to protect against squirrel bites.

In some areas, relocating squirrels by yourself is not allowed. If that’s true in your area, or the numbers needing to be relocated is larger than you feel you can handle, it might be a good idea to call in professionals. Pest control experts can help you figure out your options.

Another alternative to shooting them is squirrel repellent. You’ve got various choices when it comes to type of repellent. There are options that smell bad to them or ultrasonic and electronic emitters that create a sound that keeps them away. Electronic options may also keep away other backyard visitors like deer and rabbits.

One of the simplest solutions is to put out food and water for squirrels in a spot away from the places you don’t want them. This distraction combined with blocking off the areas you’re concerned about with steel grates or sturdy mesh barriers works wonders. Giving them easy access to food means they don’t go looking for it in places you would rather they stayed out of.

While squirrels can be pesky, and in some cases even cause extensive damage, many of the options for dealing with them come with complicated rules and regulations. You can see that just asking “Are you allowed to shoot squirrels in your backyard?” is not enough. It’s important to research the laws in your location.

Squirrels will probably multiply faster than you can shoot them anyway, so using an alternative method will be a more effective way to deal with their pesky behavior.